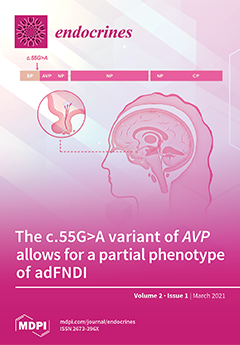 Cover Story (view full-size image): AVP variants in the autosomal dominant familial form of neurohypophyseal diabetes insipidus (adFNDI) are associated with the early-childhood onset and gradual progression of the disease to complete depletion of arginine vasopressin-producing cells. While several exceptions to this general rule have been reported, which underlie the combined effects of genetic disparities and sexual differences in the susceptibility to neurotoxicity, we document a partial clinical phenotype of adFNDI in a young adult woman, caused by a c.55G>A transition in the signal peptide-encoding region of AVP. View this paper.
Previous Issue
Volume 1, December
Next Issue
Volume 2, June
We use cookies on our website to ensure you get the best experience. Read more about our cookies here.
Accept
We have just recently launched a new version of our website. Help us to further improve by taking part in this short 5 minute survey here. here.
Never show this again