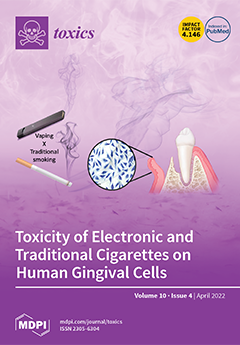 Cover Story (view full-size image): Scientific data regarding the potential toxic effects of vaping on oral health tissues are still very limited. This study assessed a novel smoke/vaping generation machine specifically designed to perform realistic cell culture in vitro experiments. This machine allowed generating representative vapor as it was produced under real conditions from electronic cigarettes, which was particularly adapted for realistic inhalation toxicology studies in vitro. The results confirmed the adverse similar toxicity effect vapor of electronic cigarettes and traditional cigarettes on human gingival cells. It also showed that short-term single exposure to electronic cigarette vapor may increase cell toxicity and inflammation. View this paper
Previous Issue
Volume 10, March
Next Issue
Volume 10, May
We use cookies on our website to ensure you get the best experience. Read more about our cookies here.
Accept
We have just recently launched a new version of our website. Help us to further improve by taking part in this short 5 minute survey here. here.
Never show this again