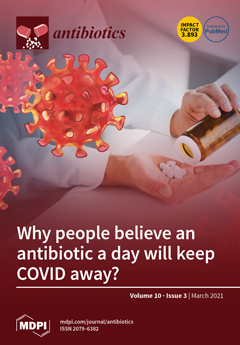 Cover Story (view full-size image): While self‐medication with antibiotics is a major contributing factor to AMR, the role of psychological distress associated with perceived health risks in explaining antibiotic self‐medication is less understood. This study addresses this knowledge gap in the context of the COVID‐19 pandemic. An online survey conducted at the height of the initial outbreak in Australia revealed that 19.5% of participants took antibiotics to protect themselves from COVID‐19. Survey results illustrated potential pathways and facilitating factors that contribute to prophylactic self‐medication with antibiotics, highlighting the significant key role of COVID‐19-induced psychological distress. The findings suggest that, to combat AMR, interventions need to focus on interrupting entrenched behavioural responses and address emotional reactions to perceived health risks. View this paper.
Previous Issue
Volume 10, February
Next Issue
Volume 10, April
We use cookies on our website to ensure you get the best experience. Read more about our cookies here.
Accept
We have just recently launched a new version of our website. Help us to further improve by taking part in this short 5 minute survey here. here.
Never show this again