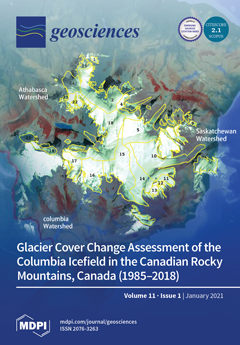 Cover Story (view full-size image): The Columbia Icefield in the Canadian Rockies serves is a major water source for the Columbia, Athabasca, North Saskatchewan, and Fraser River systems. The Columbia Icefield is one of the most visited tourist sites in North America. In this study, we measured the amount of retreat and change in areas of Columbia Icefield glaciers between 1985 and 2018. We used Landsat (TM 5 and OLI) satellite images. We concluded that all glaciers in the study region retreated and lost about 42 Km2 of its area. View this paper.
Previous Issue
Volume 10, December
Next Issue
Volume 11, February
We use cookies on our website to ensure you get the best experience. Read more about our cookies here.
Accept
We have just recently launched a new version of our website. Help us to further improve by taking part in this short 5 minute survey here. here.
Never show this again